A book in honor of Rona Goffen was presented at Palazzo Grimani by the Director of the Gallerie dell'Accademia, Giulio Manieri Elia, on Thursday, September 24, 2019 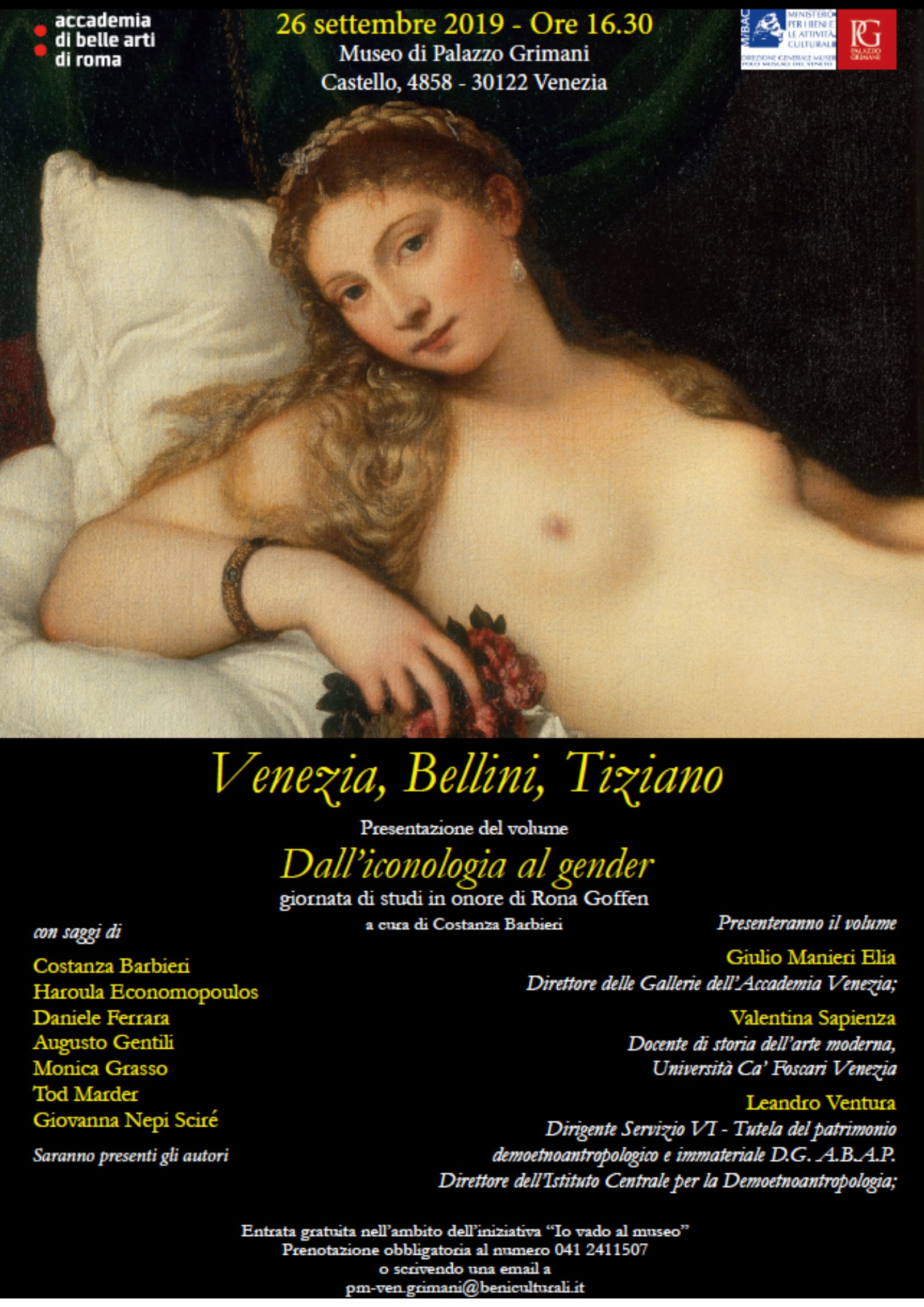 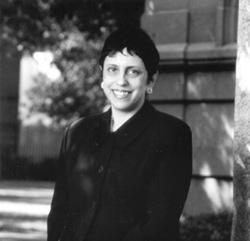 Rona Goffen, Board of Governors Professor of Art History at Rutgers University, died on September 8, 2004, at the age of sixty. Even through her final illness, she continued to work, writing and lecturing, and to affirm the values of her life--especially through attendance at the opera.

Professor Goffen was among the most distinguished art historians of the Italian Renaissance; her innovative scholarship opened new critical prospects on major art and artists. Her first publication, “Icon and Vision: Giovanni Bellini’s Half-Length Madonnas” (Art Bulletin 1975), which was based on her Ph.D. dissertation (Columbia, 1974), transformed our understanding of those much beloved yet then superficially appreciated images, demonstrating the profundity and subtlety of their creator’s pictorial intelligence. Her subsequent monograph on Bellini (1989) stands as the definitive study of the painter; typical of Professor Goffen’s approach, it is ambitious in its methodological scope and vision, articulating issues of technique and formal structure, of social and historical context, of interpretation and meaning, in a prose marked by a rare combination of verbal precision, critical enthusiasm, and wit.

That initial engagement with the art of Bellini mapped essential paths in the evolving course of Professor Goffen’s scholarship, her dedication to Venice and to the Madonna. These concerns came together in first book, Piety and Patronage in Renaissance Venice: Bellini, Titian, and the Franciscans (1986), in which a focus upon the pictorial monuments in a single church, Santa Maria dei Frari, expanded to offer a remarkably rich image of the religious, civic, and family culture of Venice. Interest in the Franciscans in turn led to the next book, Spirituality in Conflict: Saint Francis and Giotto’s Bardi Chapel (1988), taking its author beyond Renaissance Venice to late medieval Florence and its greatest master.

Having begun her career with the study of images of the Virgin Mary, the turn to the representation of women in the Renaissance seemed a natural direction. Professor Goffen’s research into the gynecological lore of the early Renaissance yielded a fuller understanding of the motif of the Giorgione/Titian Sleeping Venus, and her exploration of the patronage of Titian’s Sacred and Profane Love set that classic picture into a significantly richer social and historical context. Her studies culminated in Titian’s Women (1997), a book that significantly reoriented feminist scholarship. Recognizing in Titian’s “reinvention of womankind” the painter’s generous response to women as individuals, she insisted on the fuller humanity of his images. A different sense of humanity informs the last book she published, Renaissance Rivals: Michelangelo, Leonardo, Raphael, Titian (2002), in which she explored the competitive vitality of the artists’ world with her own blend of firmly based scholarship and historical imagination.

Professor Goffen’s teaching career began at Indiana University (1971-73) and continued at Princeton (1973-78) and Duke (1978-88). She joined the faculty of Rutgers in 1988, where she served as departmental chair (1990-96) and was honored by appointment as Board of Governors Professor of Art History in 1998. In 1997 she was Robert Sterling Clark Visiting Professor of Art History at Williams College and, in 2002, visiting professor at the Ècole des Hautes Ètudes en Sciences Sociales, Paris.

Professor Goffen served on the executive board of the Renaissance Society of America (1988-2000) and was co-editor of Renaissance Quarterly (1988-94), continuing as associate editor (1994-2000). She was a member of the board of advisors of the Center for Advanced Study in the Visual Arts at the National Gallery of Art (1998-2001). Following the floods in Florence and Venice in 1966, she became active in the Committee to Rescue Italian Art, and in 1970-71, on a Ford Foundation-CRIA Fellowship, she began her close association with the Soprintendenza ai Beni Artistici e Storici in Venice. She was the recipient of numerous fellowships from, inter alia, the American Academy in Rome, I Tatti, the American Council of Learned Societies, the Gladys Krieble Delmas Foundation, the National Endowment for the Humanities, and the Guggenheim Foundation.
At the time of her death Professor Goffen was well into a new book, Renaissance Women: Art and Life in Italy, 1300-1600, and was preparing Fathers of Invention: The Last Judgment, from Giotto to Michelangelo, the Rand Lectures in Art History she was to deliver at the University of North Carolina.

With each book, Rona Goffen consolidated her place as one of the most influential and innovative of Italian Renaissance art historians in the 20th-Century. Her 1986 study, Piety and Patronage in Renaissance Venice: Bellini, Titian, and the Franciscans (Yale 1986) earned her attention as one of the "new" art historians, combining detailed attention to the ways painters work with a probing view of how social and economic forces shape the subject matter of, and responses to, painting. It earned wide attention for its focus on the roles of piety and politics in the construction of the Franciscan church Santa Maria del Frari, which was supported by the patronage of the Pesaro family. Her Spirituality in Conflict: Saint Francis and Giotto's Bardi Chapel (University of Pennsylvania Press 1988) concerns the intense religious debate within the Franciscan Order during the duecento and trecento and how this conflict plays out in commissions associated with the Florentine church of Santa Croce (notably the Bardi Saint Francis Panel and Giotto's frescoes for the Bardi Chapel). Her Giovanni Bellini (Yale 1994), now in its second printing (Italian edition in 1990), is the definitive study of Bellini, and has earned international acclaim for the boldness of its argument and the deftness of its attention to the cultural forces that shaped Bellini's work. Her Titian's Women (Yale 1997) brought a feminist theoretical perspective to Titian's preoccupation with women as subjects. Writing in the New York Times Book Review, Gary Wills celebrates Professor Goffen's study as showing "one of her principal strengths, her skill as a social historian reconstructing the conditions of patronage, gift giving and market pricing that affected Renaissance Venice." Her Renaissance Rivals: Michelangelo, Leonardo, Raphael, Titian (Yale, 2002) explored the fascinating Italian Renaissance environment that produced perhaps the greatest of all art.

Professor Goffen was working on two new books at the time of her death, Renaissance Women: Art and Life in Italy, 1300-1600 and Fathers of Invention: The Last Judgment: From Giotto to Michelangelo (the Rand lectures, to be published by the University of North Carolina Press). Two chapters had been completed of Renaissance Women: the first on representations of the Virgin, the second on “wives, widows, and mothers.” The book focuses on placing female portraiture in its cultural, religious, and social contexts.

In addition, Professor Goffen edited, and provided chapters in studies of Titian's "Venus of Urbino" and of Masaccio's "Trinity"; wrote numerous articles and reviews; received ACLS, NEH, Guggenheim and many other fellowships; and became one of the most widely sought-after speakers at major conferences and museums throughout the world because her work is so widely read and discussed. Her writing was reviewed not only in the major journals of Renaissance art, history, and literature, but regularly in the Times Literary Supplement, the New York Review of Books, the London Review of Books, and the New York Times Book Review. Her standing insured that her books receive the attention of the general public. Indeed, the London Independent named Titian's Women an "Art Book of the Year." As Gary Wills noted in his discussion of this volume: "To argue with Goffen's book is to see how much she equips all others for the argument."

Rona Goffen's professional standing is indicated by the boards she served on and the colleges and universities interested in having her join their faculties. In Fall 1997 she was asked to serve on the Board of Advisors of the Center for Advanced Study at the National Gallery of Art. She was also a board member of the Renaissance Society of America. From 1988-94 she was co-editor of Renaissance Quarterly; and remained an associate editor of the journal through 2000. She also served on the editorial board of Venezia Cinquecento. In Fall 1997 she was Robert Sterling Clark Visiting Professor of Art History at Williams College. Professor Goffen was Chair of the Department of Art History from 1990 to 1996.