Professor McHam is a specialist in Italian painting and sculpture between 1200 and 1600. Her book on the influence of Pliny the Elder on Italian art and art theory was published by Yale University Press in February 2013. Recent publications include articles such as “The Eclectic Taste of the Gattamelata Family,” Venice/Padua, ed. Brigit Blass-Simmen, Berlin: De Gruyter, 2017, 29-40 and “The Triumph of the Church: Campagna’s High Altar at San Giorgio Maggiore,” Encountering the Renaissance: Essays in Honor of Gary Radke, ed. Molly Bourne and Victor Coonin, Zepherus Scholarly Publications, 2016, 279-92; “Donatello’s High Altar at the Santo and its Surroundings: Movement, Materials, and Meanings,” Making and Moving Sculpture in Early Modern Italy, ed. Kelley Helmstutler di Dio, Aldershot: Ashgate, 2015, 9-24 and “Visualizing the Immaculate Conception: Donatello, Francesco della Rovere and the High Altar and Choir-Screen at the Church of the Santo in Padua,” Renaissance Quarterly, 69.3, Fall 2016, 831-64. 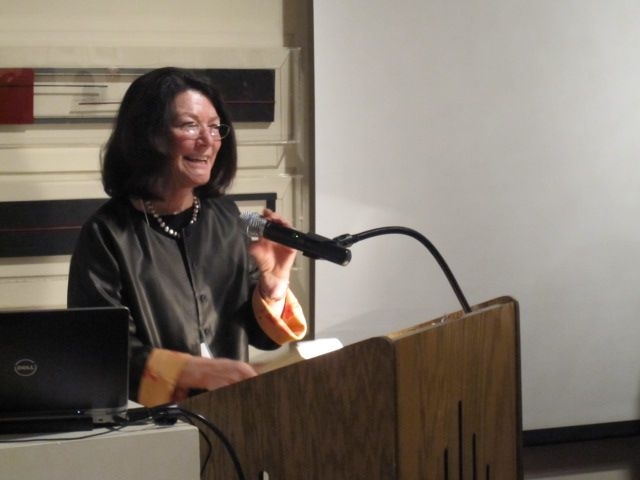 She has advised recently completed dissertations on such topics as Medici patronage of art in the Grand Duchy during the late 16th and early 17th century; the role of painted labels (cartellini) in fifteenth- and sixteenth-century painting; the painted illustrations of Virgil’s pastoral poetry; representations of the non-married ideal beloved in the Renaissance, the earliest representations of Mary Magdalen in Italy; Riccio’s reliefs at the Church of the Servi in Venice; Luca della Robbia’s glazed terracotta reliefs and Old Testament imagery in Italy’s maritime cities.

Dr. McHam thanking her former students at the symposium they held in her honor on March 9, 2013

Recent Awards: Dr .McHam was honored by her current and former students with a symposium and published festschrift called the Scarlet Renaissance in 2013.  Dr. McHam's book on Pliny won the Roland Bainton prize for the best art history book of 2013, awarded by the Sixteenth Century Studies Society. She was awarded the Ailsa Mellon Bruce Senior Fellowship at CASVA for 2014-2015, and declined an invitation to be a scholar in residence at the Istituto Universitario Olandese di Storia dell'Arte in Florence (2015). Professor McHam is the recipient of two Graduate Teaching Excellence Awards from the Northeastern Association of Graduate Schools (2003) and from Rutgers University (2002). 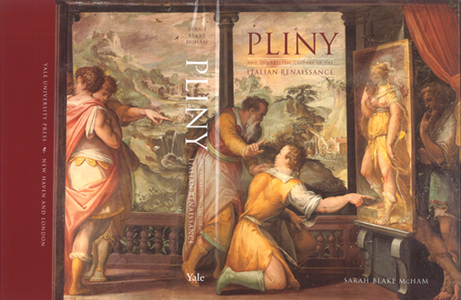 Pliny and the Artistic Culture of the Italian Renaissance: The Legacy of the Natural History, Yale University Press, 2013

“Bellano’s Invention at the Santo,” The Reinvention of Sculpture in the Century, ed. Amy Bloch and Daniel Zolli, Cambridge: Cambridge University Press, 2020, 203-19

“Antiquity as Cultural Capital in the Age of Giorgione,” Venice in the Renaissance: Essays in Honor of Patricia Fortini Brown, ed. Mary Frank and Blake de Maria, Milan: Five Continents, 2013, 83-93.

“Visualizing the Immaculate Conception: Donatello, Francesco della Rovere and the High Altar and Choir-Screen at the Church of the Santo in Padua,” Renaissance Quarterly, 69.3, Fall 2016, 831-64.

"Antiquity as Cultural Capital in the Age of Giorgione."  Venice in the Renaissance: Essays in Honor of Patricia Fortini Brown, ed. Mary Frank and Blake de Maria, Milan: Five Continents. 2013, 83-93.

Review of Susan Nalezyty, Pietro Bembo and the Intellectual Pleasures of a Renaissance Writer and Art Collector, The Art Newspaper, 27, no. 298 (February 2018), 12 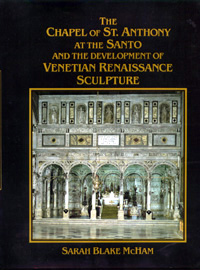 “Promoting the Cult of the Plague Saint Rocco,” Pandemic: Venice and the visual Arts in Times of Plague, College Art Association Meetings, February 2021

“The Genesis of the Tomb of Doge Andrea Vendramin,” Anniversary Celebration of Artibus et Historiae, Cini Foundation, Venice, May 2020 (postponed)

“’We Penetrate the [Earth’s] Innards and Search for Riches’: Pliny’s Hierarchy of Materials and its Influence in the Renaissance,” Istituto Universitario Olandese di Storia dell’Arte, Florence, April 2018

Board Member, Save Venice

Revival of antiquity in Renaissance art and literature, and it's influence in Venice, Padua and Florence.
--Social and political context of painting and sculpture of the Venetian Empire and of Florence, especially patronage and religious practices.
--Rhetorical Construction of Identity in Fifteenth- and Sixteenth-Century Italy

--Italy’s Interaction with the Muslim World