Professor Howard’s teaching spans Chinese and Japanese art. Her research, however, has focused primarily on the development of Buddhist art in China, as signaled by her first book, The Imagery of the Cosmological Buddha (Leiden: E.J.Brill, 1986). Starting in 1985, with the support of a series of NEH Fellowships, Dr. Howard became deeply involved with the Buddhist art of southwest China (Sichuan and Yunnan). Her work recording Buddhist cave and cliff sculptures in southwestern China has led to two ground-breaking articles: “Tang Buddhist Sculpture of Sichuan: Unknown and Forgotten,” Bulletin of the Museum of Far Eastern Antiquities, 60 (1988): 1-164 and “The Dharani Pillar of Kunming, Yunnan. A Legacy of Esoteric Buddhism and Burial Rites of the Bai People in the Kingdom of Dali (937-1253), Artibus Asiae, 57, 1 / 2 (1997): 33. Afterwards, in Summit of Treasures, Buddhist Cave Art of Dazu, China (Trumbull, CT: Weatherhill, Inc., 2001), Dr. Howard published the result of her fifteen-year research on the monumental cave complexes of the Baodingshan site at Dazu, Sichuan.

Since 1998 Dr. Howard has turned her interest to the Buddhist art of northwest China, traveling along the Gansu 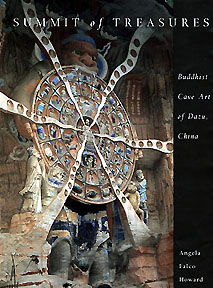 corridor to study less known Buddhist sites (Jintasi, Wenshushan, Tiantishan) which she believed preceded the art of famous Dunhuang. The outcome of this involvement was the article “Liang Patronage of Buddhist Art in the Gansu Corridor during the Fourth Century and the Transformation of a Central Asian Style,” in Between Han and Tang, Religious Art and Archaeology of a Transformative Period, Wu Hung ed., (Beijing: Cultural Relics Publishing House, 2000): 92-107. Her study of the Gansu corridor led further west to Central Asia. Her research began to focus on the Buddhist cave temples of Kuča, an ancient Kingdom along the Northern Silk Route which she first visited in 1998. In the summer 2002, together with Professor Li Chongfeng, Department of Archaeology and Museology, Peking University, she conducted a graduate seminar at the site of Kizil, Kuča, through a grant by the Henry Luce Foundation China On-Site Seminar Program grant, sponsored by the Asian Cultural Council, New York. From May-July 2003, Dr. Howard taught the graduate seminar “Revisiting the Buddhist Caves at Kuča: New Evidence Demands a New Approach” at the Ruprecht-Karls-Universitat Heidelberg, Germany. In May-June 2006, supported by an Asian Cultural travel grant, Dr. Howard returned to Kuča to do field work at the various Buddhist sites in collaboration with Professor Giuseppe Vignato, Department of Archaeology and Museology, Peking University.  The book, Archaeological and Visual Sources of Meditation in the Ancient Monasteries of Kuča (Leiden: E. J. Brill, 2014) is the outcome of several years of working together.

In addition to teaching and researching, Dr. Howard has been active in museum work. In 1999, she was hired  in 1999 by the Asian Department, The Metropolitan Museum of Art, New York, as Special Consultant in Buddhist Art, to organize with other curators the exhibition China: The Dawn of a Golden Age, 200-750 AD, October 12, '04 - Jan. 23, '05. In this capacity, she traveled several times to China visiting major museums to select the Buddhist sculpture in the exhibition. Dr. Howard also contributed the essay "Buddhist Art in China" and most of the entries on the Buddhist sculpture in the accompanying catalogue.

Dr. Howard was the Senior Western Editor as well as a contributor to Chinese Sculpture, co-authored by Wu Hung, Yang Hong, and Li Song, in the series The Culture and Civilization of China (New Haven-London and Beijing: Yale University Press and Foreign Language Press, 2006).

In 2009, benefitting from ACLS, American Research in the Humanities in China Fellowship, Dr. Howard returned to Sichuan to research the Southern Song site of Laitan, Chongqing. At that time, she was also invited by Peking University to teach an intensive seminar on Chinese Buddhist caves.

Up to the present, Dr. Howard has been teaching courses on religious and secular art of Asia.

Presently working on a monograph on the Southern Song sculpture of Laitan, Sichuan. The next project will be a compilation of a college textbook on Chinese Sculpture.