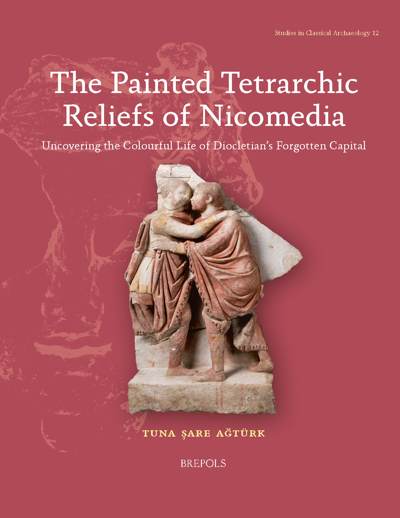 The Archaeological Institute of America is pleased to present the 2023 James R. Wiseman Book Award to Dr. Tuna Şare Ağtürk for her book The Painted Tetrarchic Reliefs of Nicomedia, Uncovering the Colourful Life of Diocletian’s Forgotten Capital (Brepols Publishers, 2021).

Tuna Şare Ağtürk’s remarkable book is the primary publication of a major new monument of imperial Rome from Nicomedia in Asia Minor: 66 painted architectural reliefs (L. ca. 50m) revealed by the 1999 earthquake. Nicomedia was the center of the Late Roman Empire in the east during the rule of Diocletian. The material, found during rescue excavations of 2001 and 2009, notably has an excellent archaeological and architectural context. The new reliefs from Nicomedia fill an important gap between the Severan and Constantinian periods and form a striking contrast with those on the Arch of Constantine in Rome. Ağtürk provides a masterful analysis of all aspects of the reliefs, interpretation of the subjects, painted decoration, marble origins and technique, and the symbolic use of size and paint. These sculptures should be included in every book on Roman Art. The reliefs depict a combination of imperial, mythological, and agonistic scenes, placed above columns in an imperial audience hall. The complex likely celebrates the establishment of Nicomedia as the Eastern Roman capital of Diocletian. Ağtürk convincingly dates the monument to 288/290, before the Caesars Diocletian and Maximian became part of the “Tetrarchic embrace.” This monument now forms a benchmark for Late Roman culture.

Ağtürk thoroughly analyzes the reliefs’ archaeological, literary, and historical contexts. These finds are the best-preserved examples of painted sculpture thus far known in Roman art. The latest techniques of paint analysis (VIL and UV imaging, USB microscopy) are used. Color photographs reflect the innovative use of technical imaging with Multibliz Profilite sunlight color-matched flash and color-neutral light-shaping fixtures. The results are impressively presented in color throughout, highlighting the results of the pigment analysis. The fact that much of the paint, including drips, still remains gives a better sense of what painted sculpture actually looked like. The author also employs careful analysis of clamp holes, lifting holes, and tool marks to understand the construction process and to argue that the frieze was put up hastily with sculptors and painters working together (possibly the same people).

Ağtürk argues that the frieze demonstrates the first steps toward the imperial iconography seen in well-known Tetrarchic examples, such as the porphyry tetrarchs, the Arch of Galerius, and the Tetrarchic paintings at Luxor. She shows that the new iconography went through a transitional phase that has not been known previously. This study expands our knowledge of material and visual culture well beyond the traditional focus on Rome. For these reasons, Tuna Şare Ağtürk’s The Painted Tetrarchic Reliefs of Nicomedia, Uncovering the Colourful Life of Diocletian’s Forgotten Capital has been chosen for the 2023 James R. Wiseman Book Award.