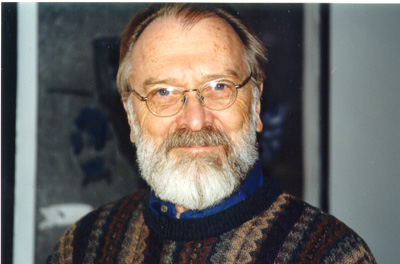 After thirty-three years as a Professor of Art History at Rutgers and forty years of full-time teaching, Dr. Matthew Baigell has announced his retirement.  At the prospect of such an enormous change for all alumni and students of our department, I thought this was an auspicious moment to interview Professor Baigell and reflect on his experiences as a scholar and teacher, and to explore his forthcoming projects.  — Aliza Edelman

Aliza Edelman: In our previous conversations, you have mentioned the interrelationship of your “identity” as an art historian and your position as a Professor of Art History at Rutgers. Would you elaborate on how you saw yourself when you arrived at Rutgers and how you see yourself now that you are leaving?

Matthew Baigell: I always felt that one had to have one’s own sense of authenticity. Our department at Rutgers developed in such a way that allowed each of us to teach as we wanted, and what we wanted, without being checked on by anyone. I find this to be very important. The beginning faculty and the advanced faculty had the exact same rights. In other graduate departments, you are allowed to teach a graduate course only several years later, and then you are told what to do. And that’s just not allowed here. We insisted, and I always insisted on, the idea that the best course comes from the instructor who wants to teach that course. That has been my guiding philosophy.

Within the class, especially in graduate courses, I felt that what I tried to do was set up certain parameters of scholarship but try not to destroy the zeal for looking at objects or the zeal for doing research. My idea always was to get a student started and let the student define the material the way she or he wanted to. The student should find his or her own voice and then proceed.

AE: As a professor, is it an enormous sense of accomplishment to observe your students publish?

MB: Yes, this is the great reward for me.  And in the past and present, students have published.  But it is not so much publishing as having your students publish in their own voices. Otherwise, it’s no fun and it squelches the individual. That’s the last thing in the world that I want to do.

AE: Speaking for many of the students here, I would say that your approachable nature is a major element in your classroom and central for your dialogue with students.  Is this an important teaching philosophy for you?

MB: Thank you. There are a hundred ways to explain anything, but there is your way to explain it. The important thing is to find out the scholarship that you do. I vowed that when I became a course instructor I would always be available to students and go back and forth ten times, twenty times, or however many drafts needed to be done to make a good paper. That is very important to me.  And it’s very exciting to see someone’s mind develop from a person who did not quite know what was involved, or did not quite know what there was to do, to someone who could just sail right through it and write the paper. With some students, you get them started and jump out of the way very quickly. For example, Eva Cockcroft, who wrote that famous article on Abstract Expressionism [“Abstract Expressionism: Weapon of the Cold War,” Artforum (June 1974)]. She came out of one of my seminars. With Eva, you got out of the way very quickly because she knew where she was going. Emerson said something to the extent of, “Better never to have read someone’s book, than to be a satellite in that person’s orbit.” You make you own orbit and do it your way. The rest will follow. That is the morally responsible way.

AE: How or why did you choose to specialize in American art?

MB: The most interesting environment is the one I grew up in, that is, America. I wanted to explore what America was like on a certain cultural level.  I was always interested in connecting to an environment that was familiar to me.  I do not believe that art comes necessarily just from art but also from some kind of environmental concerns. In order to understand art, you need to understand the environment.

AE: Throughout your career, your research and publications have changed directions in terms of subject matter.  Your early scholarship focuses on artists like Thomas Hart Benton, and then landscape painters, such as Albert Bierstadt or Thomas Cole. Your recent scholarship explores issues of cultural identification, including essays on the 1960s and the loss of self, or Holocaust or Jewish themes in American art. How do you reflect on these changes of interests?

MB: Initially, I studied artists that gave me access to a cultural identity that was not my own, like Thomas Hart Benton and Grant Wood.  Additionally, writers like Emerson and Walt Whitman were most influential.  But this was just as much an exploration of self-identity as, broadly labeled, cultural identity. In this sense, my art history became my personal quest and understanding of the material. At this point, I feel that I understand enough about Benton not to go down that road again. But there are other things that I don’t know.  At one time, I thought that I would work on African-American themes, Italian-American, gay and lesbian, Asian-American, but it is just too much.  I decided to concentrate on what I am most familiar with as a way of defining myself, as an American and as a Jew, and how I can combine that with my scholarship.

The Jewish part is what interests me right now.  This includes my research on Mark Rothko, among other Jewish artists. It might last another five minutes or five years. When I finish this cycle, I want to get back to Emerson and American art, desperately!

AE: For your research on artists, philosophers or poets, how would you define the essential elements of your form of scholarship and what makes it exciting?

MB: If I were to define my scholarship in one way or another, it would be trying to invent a dialogue with the person. It is not uncovering new facts or data. For example, Marsden Hartley is a fascinating figure for me, especially the way he read, what he read, and how he wrote.  A dialogue with his mind would just be wonderful. I’ve read everything that I could find on Hartley just to find out what goes on in his head. I have an idea for one or two articles I want to write on Hartley, but that is somewhere down the road.

I think that Robert Smithson is a very major mind in late-twentieth century art. Maybe, he is the major mind.  I have written about him but I have endless questions.  I would love to get him going on some topics and follow his mind as it’s moving. That to me is exciting scholarship.  I did this with Benton.  His type of Americanism is intriguing.  I don’t like it, but it’s intriguing. This is true with certain left-wing artists, whose politics I don’t necessarily agree with. But what prompted them to think as they thought? I would love to talk to Hitler, not that I agree with him. But what goes on in that head!  This is a question of curiosity rather than influence.

AE: What were the major challenges when you have interviewed living artists?

MB: It is very interesting because some of them have their lives down in a very canned way.  You want to write a biography but they want you to reconstruct them in a certain way. Then, you have to say that you [the artist] have said this, now what about that, and get them off on some direction the artist does not want to go off on. You try in a gracious and non-confrontational way to tease stuff out of the artist. You do it in your own style. Give me an answer. You get them going in some way. Either you get something or nothing.

AE: You spoke of retirement as just another way of defining all the other things you want to do with your time.  How do you feel about this process?

MB: After forty years in the classroom, whatever statement I have had to make, I have made it. If I don’t have it right yet, I’m never going to get it right.  I have been involved with a lot of research projects and I want to concentrate on those projects that really interest me. The main thing is to be constantly restless and to keep asking questions. You cannot think in terms of beginnings and endings. It is not so much circular or cyclical but linear. I have four books in my head that I might or might not get to. The older you get, the more you become who you are and concentrate on who you are. I don’t think of it as retirement but as refocusing. They call it retirement.