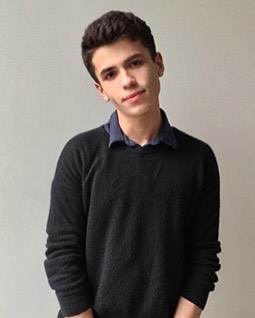 Diego Atehortúa, an art history major in the School of Arts and Sciences, Rutgers-New Brunswick, is the first Rutgers student to win a Beinecke Scholarship, and one of only 20 students in the United States to receive one in 2017.

Diego Atehortúa’s dream is to earn his Ph.D. in Latin American art.

Diego Atehortúa is fluent in two languages, but he studies art history because he knows there are ideas and emotions that can’t be adequately conveyed in a spoken or written tongue.

“I think art has the power of making sense of this complex and contradictory world we live in,” says Atehortúa, an art history major at Rutgers University-New Brunswick’s School of Arts and Sciences.  “It makes things visual and more tangible. And it doesn’t have to be permanent; it can be as ephemeral as a performance.”

Atehortúa, a junior born in Colombia and raised in Englewood, New Jersey, is the first Rutgers student to win a Beinecke Scholarship, and one of only 20 students in the United States to receive one in 2017.

The Beinecke scholarship is a program of the Sperry Fund and provides substantial scholarships for the graduate education of young men and women of exceptional promise. Each scholar receives $4,000 immediately prior to entering graduate school and an additional $30,000 while attending graduate school.

“This is a real milestone for Rutgers,” says Arthur D. Casciato, director of the Office of Distinguished Fellowships. “The Beinecke is the most thoroughly academic of the major national fellowships. It’s totally committed to people going on to graduate education. Diego impressed me as someone who would be a first-rate graduate student and scholar.”

Indeed, Atehortúa says, his plan is to become an academic art historian. He already knows where he wants to go – Duke University. He’s particularly drawn to the work of Walter Mignolo, the Argentine social critic and exponent of “decolonial aesthetics,” who is a professor at Duke.

Atehortúa wants to study art and culture from a non-Eurocentric perspective, and his time at Rutgers has already given him a chance to do that – at the Aresty Research Center, where he did directed research on 20th-century Latin American art; during a summer internship at the Museo de Antioquia in Medellin, Colombia, where he worked in

the curatorial department; and, as an assistant to Tatiana Flores, associate professor of art history, helping Flores put together a major exhibition  – Relational Undercurrents: Contemporary Art of the Caribbean Archipelago – for the Museum of Latin American Art in Long Beach, California.

“Professor Flores really took me under her wing,” Atehortua says. “Her congeniality, support, and belief in my potential have helped me see research as my future.”

As Flores tells it, Atehortúa came to her already committed to research as a sophomore. “He came up to me in 2015, when he was taking my class, and said he very much wanted to get a Ph.D. in Latin American art,” she remembers. “That was what he wanted to do with his life. I’ve never met an undergraduate student as research-driven as Diego is.”

Atehortúa has plunged into the deep weeds of academic research, according to Flores. He has transcribed interviews she did for her research – in English and Spanish. He has been important to her upcoming exhibition. “Simply put, Diego is my right-hand man as concerns this exhibition,” Flores wrote in her letter supporting Atehortúa’s nomination for the scholarship.

Having done the hard work of academic research and having confirmed that it’s the life he wants, Atehortúa says he’s excited about his future as an art historian. “I think art makes sense of the things we have difficulty finding language for,” he says.

This email address is being protected from spambots. You need JavaScript enabled to view it., Department Administrator Supervisor

This email address is being protected from spambots. You need JavaScript enabled to view it., Program Coordinator